Came across this 'news' video shot in Greenwich Village in 1966. An amazing sequence of events; one of the greatest musicians ever. Here for safekeeping. 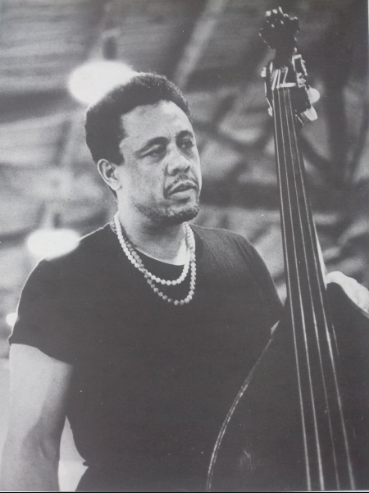 In November of 1966, the great jazz bassist and composer Charles Mingus was forcibly evicted from his apartment in New York City. Thomas Reichman's documentary Mingus (above) captures the sad moment when the musician, with his five-year-old daughter Carolyn at his side, looks through his scattered belongings the night before city officials arrive to cart everything away.

With the camera rolling, Mingus plays a few notes on a piano and then picks up a rifle and shoots a bullet into the ceiling. He finds a bottle of wine and gives a sip to his daughter. He recites his own version of the Pledge of Allegiance:

Scenes from the apartment are intercut with footage of Mingus and his sextet performing at a little club in Peabody, Massachusetts called Lennie's-on-the-Turnpike. The combo features Mingus on bass, Dannie Richmond on drums, Charles McPherson on alto saxophone, John Gilmore on tenor saxophone, Lonnie Hillyer on trumpet and Walter Bishop, Jr., on piano. The music includes parts of "All the Things You Are," Take the 'A' Train" and "Secret Love."

But the film is more about the man than the music. It records an especially painful moment in Mingus's life. He had hoped to use the loft at 5 Great Jones Street in Greenwich Village as a music school. In the final sequence, a crowd of reporters and cameramen jostle for position to record the humiliating scene as Mingus's belongings, including his musical instruments, are hauled out to the curb and loaded onto a truck. Tears appear in Mingus's eyes when the police block him from going back into the building. When the cops find hypodermic needles among his things, Mingus himself is loaded into a police car and taken away.